THE BOURNE ULTIMATUM :
Still having no memory of who he really is or where he’s from, superspy Jason Bourne (Matt Damon) goes on one last adventure to find himself … literally. With some help from his former co-conspirator, Nicky (Julia Stiles), Bourne must continue to evade CIA director Pamela Landy (Joan Allen) and spar with a mysterious figure from his past — the deadly Paz (Edgar Ramirez), who was trained in the same deadly secret program as Bourne. [link] 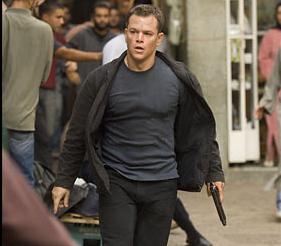 88 MINUTES :
Who wants to kill Al Pacino? That’s what he would like to know, too. Pacino stars as Jack Gramm, a college professor who does some freelance work for the FBI. One day Jack wakes up and gets a phone call telling him he only has 88 minutes to live.